I like to stretch my money as far as possible in used record stores.  I gravitate towards the $1 bins, hoping to find something new and interesting on the cheap.  For the last few years I’ve been especially interested in discovering music from outside of the US and other English-speaking countries.  Even if I don’t end up liking the record, I usually earn something about the musical culture of the country the record is from.  It’s like buying a history brochure for a buck.

In that spirit, I have created a game for myself that I’m calling Scratch Ticket Radio.  The rules are simple.  During a trip to a record store, I have $10 to spend on used 45s.  Taken together, these become “the ticket.”  Then, as if taking a quarter to a scratch ticket, I listen to each song to determine if it is a good tune or not.  If I come out with more keepers than duds, the ticket as a whole can be considered a winner.  There are several key stipulations.  To make sure that I’m taking a risk (an essential aspect of scratch tickets and gambling more generally), I cannot select 45s by artists that I already know or that contain songs that I am already familiar with.  That is, I can’t already know what’s there before I “scratch” it off – that would be cheating.

Here is my second ticket. The following six singles cost me a total of $10.

You can check out the songs via links. Hence, Scratch Ticket Radio. Most references to other songs or artists also have links.

#1: Billy Joe and the Checkmates 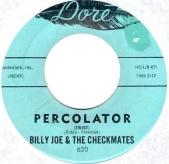 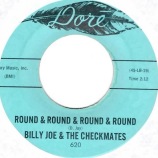 I picked this record up because I thought that it might be corny fun.  Although it is unquestionably corny, it is certainly not fun. The Percolator beat is quite literal – it is the sound you would hear on an old television ad for coffee.  The problem is that the gimmick is used up after about 10 seconds into the song and then it just keeps going.  I’m no stranger to songs that are built on repetition (after all, I like Steve Reich and Phillip Glass), but this just sat there instead of altering my sense of time and space.  Sometimes repetition is simply dull.  How did this song become a top-ten hit?  If there were a muzak version, how could you tell the difference?

The Doré label’s biggest hit was To Know Him is to Love Him by the Teddy Bears (with a young Phil Spector), and apparently after this high point there was a struggle between the two men that founded the label and one of them left to start a new label.  Unfortunately, based on what I’ve read, that backstory seems to be just as bland as Percolator.

Apparently, Billy Joe and the Checkmates were a group of session musicians rather than an actual band.  However, it seems like the unexpected hit led to them recording at least one more coffee-related song called One More Cup, which sounds like Percolator crossed with the Baby Elephant Walk.  This time they even add the sound of coffee being poured in case you didn’t get it.  It seems like that was the end of that theme, but I could be wrong.

This record is a dud. Two down.

#2: Jay and the Techniques 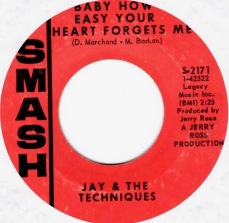 One of the rules of this game is that I cannot pick records by artists/bands I know already or songs I already know.  It turns out that I did know this band’s work – they sang Apple, Peaches, Pumpkin Pie.  If you had given me the title of the songs I could have hummed a few bars, but I would never have been able to tell you the name of the band.  For that reason, I’m not going to treat it as a violation of the rules.

The A Side, “Baby, How Easy Your Heart Forgets Me,” sounds a bit like the Four Tops to me, perhaps Bernadette in particular.  Although it hews pretty closely to a Motown-era songwriting and production template, it still works for me.  Not a great tune by any stretch of the imagination, but not a bad one.  I would not turn the dial if it came on the radio.

The B Side, Singles Game, on the other hand, is boring.  It is trying too hard to be sophisticated.  I can picture it being the theme song to a movie that promises to be a bit risqué but then turns out to be slow and moralistic.

I picked this up because of the label.  I had never heard of Smash, but it sounded like the name of record company in a cheesy movie (rather than a faux-risqué one).  Expected dialogue – “I’m from Smash Records, and kid, I’m going to make you a star!”  As it turns out, Smash actually had a respectable roster of acts.  They released records by James Brown, Jerry Lee Lewis, Frankie Valli, and The Left Banke, whose Just Walk Away Renee was covered by the Four Tops (to close the circle).

It Hurts to Want It So Bad

As with Jay and Techniques, I knew some of Mel & Tim’s work without realizing it.  They had a hit with Backfield in Motion.  I could’ve sung the title/chorus, but that’s about it.  So again, although it sounds like I’m taking it easy on myself, I won’t consider this one a violation, either.

I’m starting to wonder if I know the artists for the majority of songs that I recognize.  If you throw in classical music (in the broadest use of that term, not the actual period of music), I may not. I find that disturbing.

Mel and Tim were in the documentary Wattstax, about a concert that Stax put on in Watts in 1972.  I saw that movie, but don’t remember them in it.  It was a while ago, however, and I remember Isaac Hayes’ performance and not much else.

It was the Stax connection that led me to pick this record up. I figured I couldn’t go far wrong with something on Stax, and I wasn’t wrong.  Starting All Over Again is a nice little song.  I love how long it takes to get going – it is in no rush.  Since it has that nice rich Stax sound, I’m happy just to let it unfold.  I’m was not surprised to find out that this was a hit.

The flip side, It Hurts to Want It So Bad, is OK.  The lyrics are pretty corny, but the performance makes it easy to listen to. 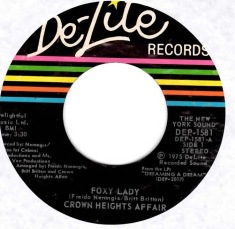 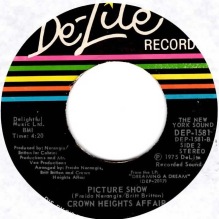 I picked this up for several reasons.  First, it was hard not to want to listen to a song from the 70’s called Foxy Lady.  Add to it that for some reason I find it endearing that the band seemed to be going for something upscale with their name but did not quite get there (kind of a like a Michelob of band names).  The fact that the label was De-Lite was just icing on the cake.

Just a note – the Crown Heights Affair should not be confused with The Crownhate Ruin.

Foxy Lady didn’t disappoint, and it also called forth two very different musical memories. First, it sounds like Dr. Dre stole the synths for his G-Funk thing from this group.  Second, something about the dissonance they used reminded me of the theme from the TV show Ironside.  It is almost like Foxy Lady is the Ironsides theme on some sort of sedative.  I had not thought about Ironside for decades, but that opening music was lodged somewhere in my brain. Speaking of backstory, the show’s opening provides that in about 20 seconds. Very economical.

Picture Show doesn’t really go anywhere. Another split. One up, one down. 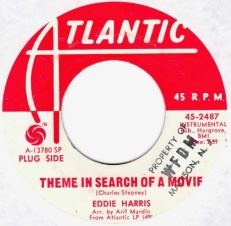 I picked this up because of the title.  I was suckered in, thinking it could be some really cool cinematic piece. I guess I was looking for something along the lines of Morricone or maybe even Ry Cooder.  The Pirandello-esque name was also striking.  Regrettably, it was not very interesting.  It turned out to be a bit too smooooooooooth for me.  The flip side, Listen Here, is OK, and it has more going on to my ears.  However, this is jazz, which I know less about than some other genres, so perhaps I’m missing some really fascinating things that are happening in Theme In Search of a Movie.  From the looks of things online, Eddie Harris seems to have a devoted following, so it speaks to somebody even if it didn’t really do much for me.

One up (though not excitedly), one down.

I have a dozen or more benefit compilation CDs, but I don’t have many songs made specifically for that purpose (a la Band Aid’s Do They Know It’s Christmastime?).  I have Free Nelson Mandela, Self-Destruction and Sun City, but that is about it.

Unlike the infighting at Doré Records, this single actually has a bit of an interesting backstory.  When Band Aid came out, the organizers were criticized for having few black musicians, and none from Africa.  You know, where the folks experiencing the famine the song was calling attention to were living.  In response, some of the people associated with the Two Tone label and scene (e.g., The Specials, Madness, etc.) decided to put out a record with a multiracial band and to devote a side to artists from Africa.  The release is considered a double-A side record, so while Starvation appears to get top billing, the African side is technically not treated as secondary.

Starvation, the English language side, is a cover of an old song by the Jamaican group the Pioneers.  They also did Long Shot Kick De Bucket, which I knew already.  This doesn’t violate the rules, but it reminds me how intertwined the music industry is.  Though well intentioned, this version is kind of boring.

Tam-tam pour l’ethiopie should not work, as it is a mess of sounds from the era.  You hear traditional African instruments with 80s’ studio production (e.g., excessive echoes).  Even with that, I still liked it.  I’m sure having folks like King Sunny Ade and Mory Kante helped.  It is not going on any mix tapes, but I may listen to it now and again.

When I see charity records in used bins, I wonder about them.  Is any portion of the resale going to the charity they were intended for?  I doubt it very much, but some part of me thinks it should, and that if it did, we would be encouraged to buy and resell these records to keep the donations flowing.  Unlike dealing with a chain letter, it would actually be enjoyable. And unlike A Tool to Deceive and Slaughter, it might do some good for society.

There are two ways to think about this ticket.  On the one hand, I only like six out of twelve songs.  That doesn’t sound like a win.  On the other hand, five out of the six records had at least one song I liked – that sounds like a win to me. That’s what I’m going with.

Billy Joe and the Checkmates

Music for Pieces of Wood https://www.youtube.com/watch?v=Mv_8UaP_QRI

To Know Him is to Love Him https://www.youtube.com/watch?v=DCnUsInBQws

Jay and the Techniques

Baby, How Easy Your Heart Forgets Me https://www.youtube.com/watch?v=Q4d-E2VkFSA

Starting All Over Again https://www.youtube.com/watch?v=LDtPrJIxB68

It Hurts to Want It So Bad https://www.youtube.com/watch?v=ttMhpMvCLGk

Theme in Search of a Movie https://www.youtube.com/watch?v=1HLA5adVGTI