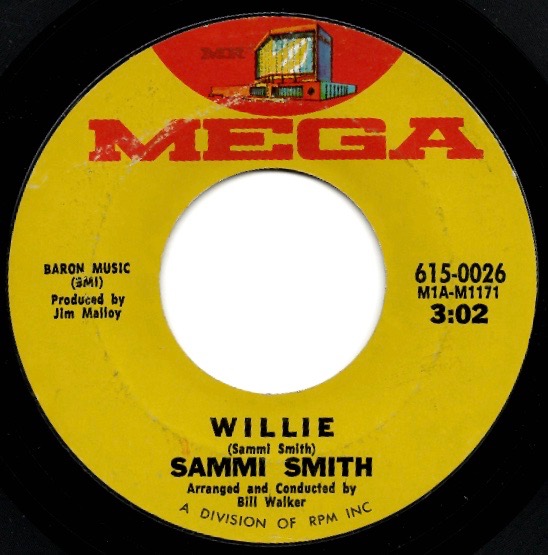 Prologue: I like to stretch my money as far as possible in used record stores.  I gravitate towards the $1 bins, hoping to find something new and interesting on the cheap.  For the last few years I’ve been especially interested in discovering music from outside of the US and other English-speaking countries.  Even if I don’t end up liking the record, I usually earn something about the musical culture of the country the record is from.  It’s like buying a history brochure for a buck.

In that spirit, I have created a game for myself that I’m calling Scratch Ticket Radio.  The rules are simple.  During a trip to a record store, I have $10 to spend on used 45s.  Taken together, these become “the ticket.”  Then, as if taking a quarter to a scratch ticket, I listen to each song to determine if it is a good tune or not.  If I come out with more keepers than duds, the ticket as a whole can be considered a winner.  There are several key stipulations.  To make sure that I’m taking a risk (an essential aspect of scratch tickets and gambling more generally), I cannot select 45s by artists that I already know or that contain songs that I am already familiar with.  That is, I can’t already know what’s there before I “scratch” it off – that would be cheating.

Special Note: Here is my third ticket. The following six singles cost me a total of $11, so I broke my rule. No matter what I did, I couldn’t get the math to work with the singles that I had in my hands, so I ended up spending the extra buck.

I grabbed this single strictly because of the label. It is so perfectly early 70’s ugly. The color scheme, the font, the image in the logo – it looks like the type of material I had to read in elementary school when educational publishers were trying to be modern.  Turns out that this was poor packaging on a good product, as there was nothing ugly 70s about the songs themselves.

Indeed, getting turned on to Sammi Smith has filled a gap in my music knowledge.  She had more than a dozen hits and was Mega’s biggest star. Her biggest hit was “Help Me Make It Through the Night” – a song I knew from various versions, but I’m not sure I would have recognized her version. That song was written by Kris Kristofferson, and apparently she was associated with the outlaw country crowd throughout the 70’s (even after it was not the flavor du jour).  She then left the industry in Nashville to do her own thing (including working on Native American issues and creating her own line of pottery).  These bits of information make me want to learn more about her, as it seems like she lived quite a full life that was not without its heartaches.  More importantly, the songs themselves make me want to hear more by her.

Both songs are good, but the B side is the real find to my ears.  She has a nice, lived-in voice, and the production allows it a lot of room.  The unhurried pace enhances the feeling that the song and story is being shared in real time, as it coming to her.  Since getting it, I have been listening to it quite a bit.  I imagine that Kelly Hogan would do a great job of covering Willie – maybe she already has.

I also grabbed this single because of the look of it. The design screamed “regional label” to me and so much good music has come out of Louisiana I figured it was a worth a shot.  After listening to the single at home I did some research and discovered that some people think that the A side was the first “swamp pop” hit, but I honestly don’t hear much of the swamp in the song at all.

Dale and Grace were a short-lived duo.  It seems that the collaboration was never easy and it may have been a “don’t let the door hit your ass on the way out” kind of break up.  As it turns out, I did know I’m Leaving It Up to You.  I figured that there were bound to be many songs with that name, but I was flat out wrong.  I think I might have heard it first from Donny and Marie.  I still don’t understand sibling duos singing love songs (See Nino Tempo and April Stevens from Scratch Ticket Radio #1).  The B Side also has a title that seems to have been used a million times.  It certainly sounds like a million other songs.  It strikes me as perfect for a TV commercial, plugging a new type of laundry detergent that keeps things really clean and smelling great all day.

I also bought this because of the label, but also because of the singer’s name – it sounded like the name of teen idol in a forgotten B-Movie. Unfortunately, Johnny Cymbal’s life also had the trajectory of a movie version of a tragic rock star –  busy life, kids, addiction, Christianity, and early death. It was like Walk Hard (a movie I heartily recommend), but only for real and with a much quicker end.  However, during his brief life Johnny Cymbal was quite involved in music production and song writing.  I didn’t know that he was behind Mr. Bassman, a tune that I have long thought to be an exemplar of dumb fun.  I got that song on a mix tape many years ago and never knew the artist’s name.

As for the music itself, turns out I did already know Teenage Heaven.  Again, I thought it might just be one of many songs with that title, but no – it’s the one that celebrates stars who have already passed away. It’s also the one that skips to 100 years in the future to wonder what people will say about the deaths of singers that were still alive when the song was recorded.  That seems a bit morbid to me.  In addition, since this came out in 1963, it provides evidence that the damn Baby Boom generation was already trading on nostalgia for the 50s not long after the decade had ended.

Cinderella Baby is also not very good, though not as odd.

#4: The Dixiebelles (With Cornbread and Jerry)

Why Don’t You Let Me  Free 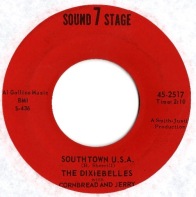 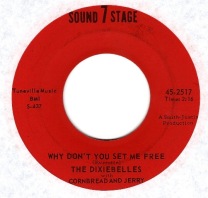 I picked this up because Joe Simon was also on Sound Stage 7 (See Scratch Ticket Radio #1).  I recently picked up his album called No Sad Songs.  It’s good, so that gave the label some credit in my book.  I was also intrigued by the presence of Cornbread and Jerry.  How could I turn down a chance to hear what a duo named Cornbread and Jerry could bring to the party?

Holy cow, this is awful.  Southtown U.S.A. sounds like Dixieland via a bad Hollywood musical or what I imagine your brain feels like when you do bath salts.  Or the soundtrack for when that mechanical monkey you have that plays the drums keeps playing and starts looking at you funny even after you take his batteries out. Amazingly, this got to #15 on the charts.  I think this fact highlights how skewed people’s perspectives of the 60’s music scene can be.  In the popular imagination it is all Beatles, Supremes and Dylan, but it was also junk like this.  The fact that it rose to #15 gives a good indication that songs like this were a big part of what was happening.

Although the music is maddening, the backstory is somewhat fascinating. By some accounts, the singers who performed on this particular record were white (possibly The Anita Kerr Singers), but the promotional material featured black women.  The touring group was also black women, who were on later records attributed to the Dixiebelles.  Although studio created acts don’t always tour with the performers who actually cut the record, I can’t think of another instance in which black performers were used as the face of a white act.

Not sure what Cornbread or Jerry added to all this, but I’m steering clear of them in the future.

Another two down. The losses are mounting. 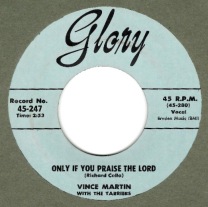 I’m not exactly sure when this single was from.  These songs came out on a 78 in 1956, so I’m assuming this 45 was either released simultaneously or not long after. There also seems to be some confusion about which song should be treated as the A side.

I picked this up because what I consider the A side (Only If You Praise the Lord) seemed clearly gospel in orientation, while the B side (Cindy, Oh, Cindy) appeared to be a secular love song. Who puts a love song on the back of a gospel tune?  Well, Vince Martin does.  Indeed, it seems like he followed his muse to many places.  In the 60s, he got involved with folkies like John Sebastian, and in this century, he did work with Thurston Moore. There is a documentary about him called Vagabondo, which suggest plenty of people know and care about his work and life.

Only if You Praise the Lord is perfectly fine, but I have not returned to it since I listened to it.  Since I don’t partake in fence-sitting in this project, I’m going to treat it as a bust.

On the other hand, I find Cindy, Oh Cindy to be haunting and I can’t get enough of it.  It is simple, but the tune, his voice and the production all work for me.  I have heard a number of musicians (e.g., Little Steven Van Zandt, John Lydon) talk about how difficult it is to write a good pop tune – in the future, when people make this point there is a good chance I will think of this song.

I had no idea what I was getting into with this record.  I liked the image and the fact that I didn’t have any reference for what Alithia might be was intriguing. Surprise! The Escorts were all serving time in Rahway Prison when they recorded this song.  I couldn’t have predicted that.

Given their situation, Disrespect Can Wreck certainly can come across as a bit too on the nose about failing and hoping for redemption.  However, I dig the end, when the cops show up and the singer gets sent to prison.  I also dig when the kid is talking back to his mom.  This spoken testimony and earnest moralizing is just as 70s as the look of the Mega Records label, but in this case I find it to be charming.  All We Need (Is Another Chance) also becomes more compelling when you know they are in prison, and it has better music than the A side.

Just going by the numbers, this is a losing ticket.  However – however – Willie and Cindy, Oh Cindy have a solid chance to find their way onto my 2018 year-end mix.  For that reason, I take this ticket to be a winner and an example of why crate digging is fun in the first place.  Although you do have to work your way through the dross, it is exciting when you stumble upon great stuff you have not heard before.  Yes, the process itself is an enjoyable way to spend time, but the promise of finding buried treasure is what keeps me motivated.

Help Me Make It Through the Night   https://www.youtube.com/watch?v=jLQAAxcBTQs

I’m Leaving It All Up to You    https://www.youtube.com/watch?v=OLrphMDcFeE

I Can’t Go On Living Baby Without You   https://www.youtube.com/watch?v=kKKHCEtCP4M

Only If You Praise the Lord   https://www.youtube.com/watch?v=Ia9DiRQTY-c

All We Need Is Another Chance      https://www.youtube.com/watch?v=qprlhIUpQ9E