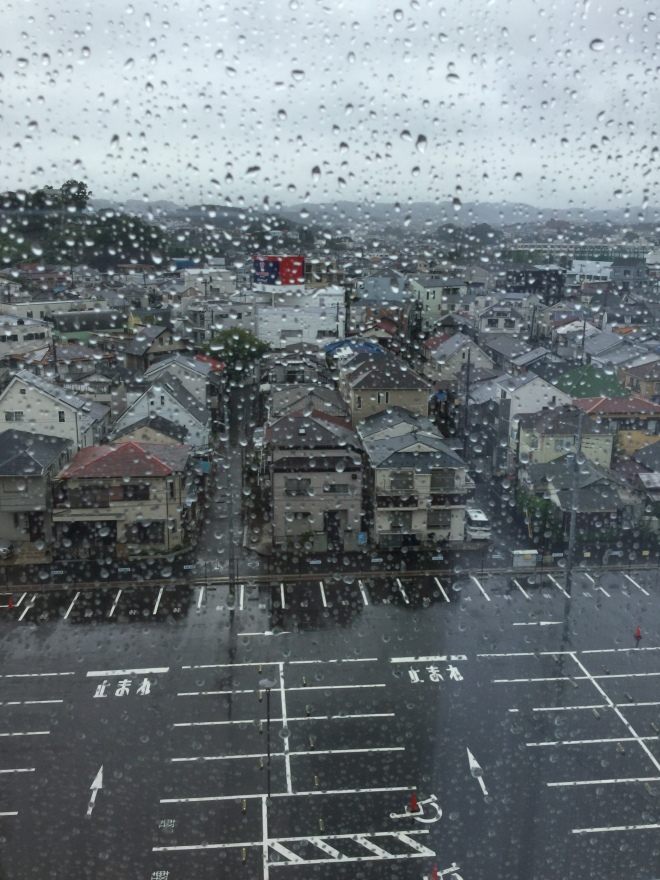 Posted on May 25, 2019 by listeningstationeight Posted in Uncategorized

For an author whose books I have never read, William Least Heat-Moon has had a lasting influence on my ways of thinking. In his book Blue Highways, he roamed all over the United States, taking old and forgotten highways to explore out of the way places as a way of finding himself. For PrairyErth, he spent his time traveling around a single county in Kansas. This has always struck me as remarkably clear-sighted. There are times when what we need to do is ramble to and fro, picking up interesting bits as we go. Then there are times when we need to hunker down and explore just a few things in more depth.

Last summer I headed with my family to Japan for a sabbatical. I was going to be there for eight weeks. They would be there for two, and then I would be there on my own doing research for the next six. Before we left, I had already plotted out how I would spend my free time while I was alone. I mapped Shibuya and a few other Tokyo neighborhoods that had lots and lots of specialty record stores and I made a list. I looked forward to heading there, spending as long as I could in one store before breaking to eat and then heading onto the next. I knew where the blues place was, where the Jamaican place was, where the indie rock place was – I was going to explore the full buffet that Tokyo had to offer a music fan with some time and a bit of cash. I also enjoy making field 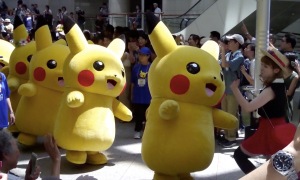 recordings, so I was looking forward to capturing the sounds of events such as this March of the Pikachus that I stumbled across (Click here for short video clip). So my plan was really to take a Blue Highways approach, bouncing around Yokohama and Tokyo, collecting various sounds as I went.

However, a few days after we arrived I came down with a terrible flue and was bed-ridden for a week. Two days after seemingly recovering, I started to have a tingling feeling in my hands that I couldn’t shake. At 3:30 that night, I discovered that I couldn’t walk and that I needed to go to the hospital. Even though we were on the 12th floor of an apartment building, around 4 AM I could clearly hear the ambulance approaching as its alarm pierced the quiet of the not-quite-morning. I was rushed to the hospital and by noon the doctors told me that I had Guillain-Barre Syndrome. I was going to lose use of my arms, hands, and potentially my voice. If it got to my lungs I would have to be intubated. They were going go to give me medicine, but they expected that it would take four to six weeks for the symptoms to peak, and then I was looking at months of rehabilitation. Luckily for me, neither of those things turned out to be the case. However, that night as I lay in bed, waiting for the symptoms to get worse before they would get better, my world became quite small. Rather than freely exploring the streets of Tokyo, for the next three and a half weeks I was in the hospital. Rather than doing Blue Highways, I was now doing PrairyErth. What did this mean in terms of sound and music?

The first day, I experienced the hospital as a cacophony. I was in a wheelchair, being

pushed from room to room as they conducted a series of tests. I would have to wait each time, listening as various names were being called and announcements made over the PA system. This reached its crescendo when I had to get an MRI of my brain (a stroke would have ruled out the Guillain-Barre). Mind you, I have tinnitus, so sticking my head inside the machine was like getting front-row tickets for a dubstep concert. Here’s the actual MRI I was in.

By contrast, every other machine in the hospital seemed to play songs that were intended to put you at ease. Elevators played the Four Seasons by Vivaldi. Automatic doors played the March of the Sugar Plum Fairies from the Nutcracker Suite. Even the dialysis machine I was hooked up to for my plasmaferesis played a song. I knew that my infusion was complete when I heard Fur Elise. This consistent presence of music even played a role in my interactions with doctors. Once while getting an electrostim test (a process during which they give you a series of electric shocks and test to see how long they take to travel down a nerve), the doctor stopped for a second and apologized that he had forgotten the BGM. This was not a medical procedure, but was rather the Japanese shorthand for background music. I knew this because at some hotels I have stayed at in Japan you can turn the BGM on and off with a knob on the headboard of your bed. Since there was no sound device in the examination room, he pulled out his cell phone and gave me a choice – George Benson, Pat Methany, King Crimson, or Steely Dan. I immediately chose George Benson, and soon his smooth sounds filled the room as I was getting increasingly painful electrical currents sent through my body. I told the doctor the music sounded like what you get when you are on hold. He said he plays it when he gets stuck in traffic in order to not get aggravated.

At first, I was still able to use my hands, so when I was lying in bed, I would try 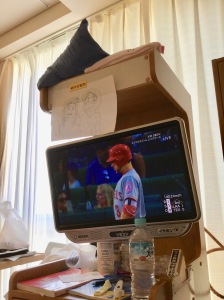 to find things on the TV to distract me. They didn’t have that many channels, but I was often able to find something engaging. I have always found the sounds and rhythms of baseball on tv to be soothing, regardless of what language it is in. At night I would watch/listen to Japanese games, and then in morning I would watch/listen to US games being broadcast in Japan. However, after about a week I lost use of my hands. That meant that I could not change the channel myself and had to ask a nurse to do it. I felt bad about requesting such a trivial thing when they needed to be taking vital signs and administering medicine, so I really tried to find something that would keep me occupied for a good long while. Before midnight, I would usually choose sports or the news. It happened to be a period of severe weather, so often I would just have the weather reports on, with seemingly endless hours of coverage of where it was raining, where it was flooding, and where would be hit next. One night I got lucky and there was a live enka performance 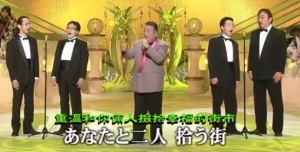 (sample here). After a week of BGM and muzak coming from machines, I savored every corny, cheesy moment of that broadcast. At 2 AM the main channels would sign off, and like the dialysis machine they would announce the completion of their day’s work with a pleasant little song.

I was not sleeping very much because I could not swallow, so that meant I was up most of the night with only the hospital itself to listen to. I could hear the nurses’ feet as they went from room to room. I came to recognize the distinct sounds of all the different call buttons in my part of the ward. When no nurses were moving and no call buttons had been pushed, I could hear the structure itself shifting. Sometimes storms passing close by caused it to creak. At other times the pipes gave off staccato beats. More often there were enormous, gaping silences. I knew the next day was about to begin when I heard the nurses gather and in unison repeat some type of oath. They would then scurry off to check on patients and the hospital would again be filled with a variety of sounds. 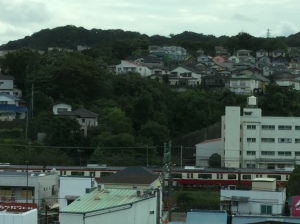 Another very striking aspect of the experience was what I could not hear. Outside the window of my room I could see the town around the hospital, but the sounds were inaccessible. Every morning, I watched the owner of a local restaurant wash the steps in front of his establishment, hang up the “open” sign, and welcome the first customers of the day. From the window of the visitor’s lounge I could spot the local trains and eagerly follow them as they passed. I had to imagine the sounds these things made. 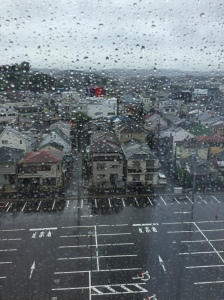 I couldn’t even hear the sound of the rain as it washed against my window.

But somehow, I could hear each ambulance as it approached the hospital.