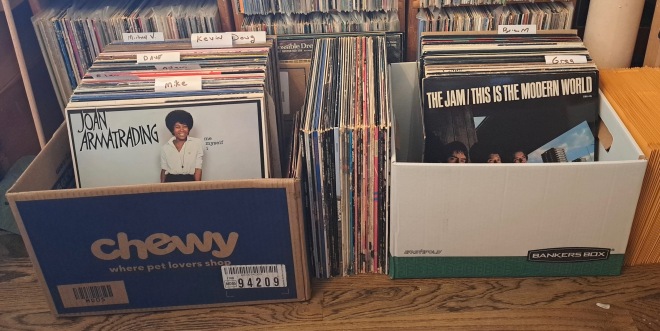 When I was just out of high school, I tried to convince my friends that we should never buy the same records. Given the increased ease of taping, I figured that if somebody had a record, it was the same as if everybody had the record. Why buy another physical copy if the money could be spent on a record that wasn’t already in our network? However well intentioned, this quasi-communal approach to music collecting didn’t take off. Then MP3 and Napster came along and rendered the idea moot.

However, at some level I have maintained that desire to transcend the record as a commodity form, even while cherishing its physical existence. Picking up this vibe, last year two different friends unloaded their record collections on me. With one I got to pick anything I wanted (I think I took about half) and the other made me take two whole boxes. For him, it was all or nothing. Fair enough. Earlier that year my wife also decided to give up most of her records. We have a had a shared bank account for over thirty years, but our records have remained firmly sequestered from each other. I’ll have to ask even older heads what anniversary brings about the combining of LPs.

Between the three of them, this meant that I had a ton of new records. From the start I knew I was not going to keep them all, and so I developed a process. First, of course, I would take the records that I wanted. These were generally either ones that I had always had my eye on, but hadn’t bought because I don’t have unlimited funds (Naked Raygun? Yes!), or records that I had been interested in, but not enough to buy (John Fahey? Sure, why not?). Then I would give my younger son copies of anything that was in my own collection. I mean, if I already had it, by definition it was good and therefore he should have it in his own collection, right? (Hello, Stiff Little Fingers and Squirrelbait). Then I asked him to flip through the records to take anything else he wanted. 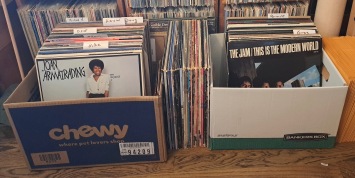 From the beginning, I had one main goal – get records into the hands of people who would appreciate them. I made a pledge to myself to not end up selling them at the used record store. So, in effect, I’m running a volunteer foster home for records. To that end, I reached out to people with tailored offers of bands I knew they liked or might like. I found nine takers. The records in the boxes are waiting to go out to their new families, and I only have about 30 records left to give away (seen in-between the two boxes in the photo). During this time, I have figured a few things out.

* There are apparently 1.5 copies of Changes One by Bowie in circulation for each person on the planet.

* Nobody in my generation of New Englanders bought their copy the 1967 Impossible Dream Red Sox LP. Instead, it was passed down from their parents as a marker of a brief moment in time when the  gothic gloom of the Northeast lifted, if only for a moment, only to be inevitably crushed once again. That LP is just as essential an account of a forever lost New England as the Scarlet Letter, and I don’t think sociologists or anthropologists have reckoned with the seismic changes the Sox winning  the World Series in 2004 has wrought.

* The Monkees released more albums than you could ever imagine.

* Even people who were not DJs at my college station stole records from it.

* I think I was more accurate than any algorithm in figuring out which disparate bands might go together.

* Nobody wants records by Generation X or Love and Rockets.

I also figured out that his would never have worked when I was younger. At that point, if somebody offered me their entire record collection to process and redistribute I think I would have messed it up. I certainly could have handled the logistics of it, but I’m positive I couldn’t have kept my judgmental and snarky trap shut. I can hear myself saying, “What? Why did you have this record in your collection in the first place?” or “Really? This record? I thought I knew you.” At that point, the well-meaning donor would have justifiably told me to buzz off and I would have walked away empty handed. I’m not saying I don’t still have strong opinions about bands, but at this point they don’t typically don’t turn into opinions about the people who like them. Because the world is such a difficult place, now I’m glad when somebody finds something that brings them joy.

I recently had to unexpectedly open a new wing in my foster home for records. I was talking with the owner of a record store that I still frequent in Cambridge (Cheapo Records in Central Square), and somehow my interest in 78s came up. He said he had a bunch in the basement that he would just give me next time I visited. True to his word, on my most recent trip he brought me down some rickety-stairs to a mostly empty basement. He went back upstairs to tend to customers, leaving me to pick through a couple of shelves of 78s. There were loose piles, records in boxes and a few in albums specially designed to hold multiple records. I had to examine them gingerly because 78s can break with no notice.

After about 15 minutes of browsing, I left with a milkcrate of things I selected and a small record box that was full of somebody’s collection of folk music from around the world.

Since these records had been in basement for a long time, and probably forgotten long before that, they needed some TLC. I’m currently going through them one-by-one, giving them a much-needed scrub and new sleeves. We serve no gruel at this foster home!

However, I do worry about some of these 78s. Whichever ones I don’t keep may be back out on the streets. Some of them proclaim themselves to be Non-breakable Under Normal Use, and they have certainly exceeded that. They have withstood the ravages of time, dust and mildew. But what about their potentially fragile psyches? Will being let go one more time finally break them? Can my conscience carry that weight? Come Let Us Be Joyful – A cruel taunt indeed when one is cradling a handful of ancient soon-to-be-orphans.