Because I really like to spend time in used record stores, I need to limit the damage during any one trip.  This means that I do not buy expensive albums, like the ones that line the walls of these places.  “$75 for Brigit Bardot reading the collected works of William Carlos Williams? No thank you.”  Instead, I always start in the $1 bin (or whatever a given store charges for its cheapest wares), and then work my way towards genres that I am currently exploring.  It is in the dollar bins that I was able to find a replacement for a Phil Ochs record I had lost somehow, and it is there that I reliably pick up interesting gospel records and discover artists I had never heard of from around the world (Hello, Olga Guillot!).  I am also keen to find oddities, as well, and recent albums I bought include a guide to CB radio etiquette, a field recording of a bullfight, and recordings of ambient sounds at JFK airport in the early 1970s.  I don’t always listen to these records before I buy them, figuring that if one is a real dud I can just donate it, continuing the grand used record cycle of life.

In that spirit, I have created a game for myself that I’m calling Scratch Ticket Radio.  The rules are simple.  During a trip to a record store, I have $10 to spend on used 45s.  Taken together, these become “the ticket.”  Then as if scratching off the ticket, I listen to each song to determine if it is a good tune or not.  If I come out with more keepers than duds, the ticket as a whole can be considered a winner.  There are several key stipulations.  To make sure that I’m taking a risk (an essential aspect of scratch tickets and gambling more generally), I cannot select 45s by artists that I already know or that contain songs that I am already familiar with.  That is, I can’t already know what’s there before I “scratch” it off – that would be cheating.

Here is my first ticket. The following four singles cost me at total of $10.

You can check out the songs via links. Hence, Scratch Ticket Radio. 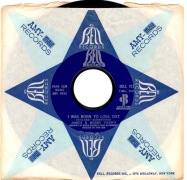 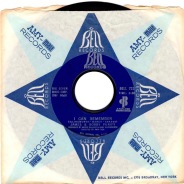 I picked this one up because of the label and sleeve.  Often old 45s are housed in plain white sleeves, or they are in sleeves that come from some other label entirely.  This record had the original sleeve, so that was a plus right away.

I was a bit unsure about the label itself.  I was familiar with this Bell logo, but I didn’t know if this was the same company.  After doing some research I discovered the version above was an earlier one and was replaced by the one I knew in the 1970s.

As it turns out, I actually knew of the Purifys’ work already.  They had a hit with “I’m Your Puppet.”  Although I could have sung the chorus from memory if I had been given the title, I could not have told you who performed it in a million years. For that reason, I don’t feel like I violated my guidelines in this case.

The Purifys’ story contains some interesting elements.  The duo were cousins, and “Bobby Purify” was the stage name of Robert Lee Dickey.  Mr. Dickey was replaced by a second “Bobby Purify” in the 1970s named Ben Moore.   Mr. Moore eventually went blind and then joined the Blind Boys of Alabama.  Learning the extended history of the performers made the record already feel like a winner, but I’m judging them on the songs alone.

So, the music then.  I think the B Side is the better of the two tunes. I Was Born to Lose Out is fine, a kind of standard-issue up-tempo R&B tune.  I didn’t find myself thinking about it all after I played it.   I Can Remember should have suffered the same fate, as it is not terribly original, either. However, the solid performance and production sold me on the melody and had me humming it to myself afterwards.  Not revelatory by any stretch, but perfectly listenable.

This is a bit of split.  I Was Born to Lose Out is a draw at best, but I Can Remember is a winner.

I Can’t Go On Living Baby Without You 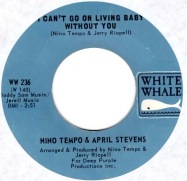 I picked this one up entirely because of the label.  What a cute little White Whale!  This was an indie label, with mostly one-hit acts. However, they did have The Turtles (check out this suit and the zany French Horn player not actually playing the horn). Apparently, Warren Zevon was a house songwriter, but I don’t know what he had a hand in producing.

As it turns out, Nino and April are brother and sister.  This struck me as odd when I was listening to the lyrics of the song, but perhaps that is because I don’t have many other male/female sibling acts to compare them to (save Donny and Marie).  Is it strange that a brother and sister would be singing “all strung out on you baby” together?  I guess I most often think of male and female duos singing to each other, especially in a love song, rather than singing in unison towards an outside object of affection.  Also, in the videos April looks like a character that Maya Rudolph would play in a parody of a 60s video.

But yes, the songs. The A side, I Can’t Go On Living Baby Without You, is no good whatsoever.  Dum, da dum, da dum da dum, da-dum-da-dum (repeat for nearly 3 minutes).  Holy cow is it boring.  The dancing crowd in the video look like they are themselves strung out on heavy narcotics, but it may just be an effect of the song.  The B side, All Strung Out, is competent but it sounds like about a thousand others songs from the 1960’s.  At times, I was trying to match parts of the song with well-known hits.  “Are they going for Righteous Brothers vibe in this section?  Or was that a bit of the Association? Maybe it’s from a Fifth Dimension tune?”  Even though I was hearing this song for the first time, it seemed as if I had already heard it a million times on oldies stations.

This record was a bust.

Glad to Be Your Lover 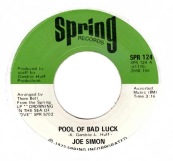 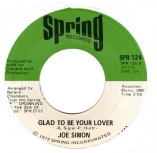 In part I bought this 45 because of the label. I was attracted to the nice, simple layout.  I hadn’t heard of Spring, but since Gamble and Huff wrote the A side I had some sense that it would be smooth soul or R&B.  When I was much younger I was more into the 1970’s Philly sound than I am now, but my interest was piqued.

It seems like I probably should have heard of Joe Simon, but I had not.  He had a number of hits, but I didn’t recognize the names of any when I looked him up.  His work has been sampled, but again, I wouldn’t recognize it when it was being used. So, other than the Gamble and Huff credit, I didn’t have anything to go on.

Pool of Bad Luck is fine.  If it came on the radio while I was driving I wouldn’t change the station.  The chorus is the best part and the end picks up steam when the musicians cut loose a bit.  On the other hand, Glad to Be Your Lover just kind of sits there and I don’t really have any nice things to say about it.

As with the first record, a split decision. One good song and one forgettable one.

#4. Kathy Young and the Innocents 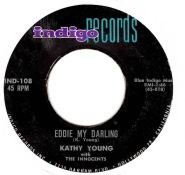 I bought this record because I liked the logo for the label, and because it had one of those numbered stickers on it.  As somebody who used these kind of numbers myself (see a previous post), I felt some solidarity.  It also made me wonder what else was on the original owner’s list and what kind of system they used for numbering.

I couldn’t find out much about this record.  To honest, I didn’t try too hard.  Indigo Records only existed for three years, and the Innocents appeared on almost 1/3 of the songs, though not all with Kathy Young.  The biggest issue here was that as soon as I started to play A Thousand Stars in the Sky, I was able to start singing along. It is a pretty melody, a good example of 50’s songcraft, but it needs to be counted as a fail because I actually did know the song.  As for the B side, I was confused at first, thinking – “Wait, is this the same song?”  Then I realized it’s just another 50’s slow-dance song, like fifty million other songs from that time, so of course it was going to sound like the A-side.  Have you ever had the experience of singing one 50’s song to yourself and then realizing that at some unknown point you transitioned into another?  I have, and it is because of songs like this.

This one is a bust – really on a technicality – but a bust nonetheless.

I have no buyer’s remorse, but overall this first Scratch Ticket Radio has to be described as a loser.  There were two good songs and one painful reminder of the imperfect nature of memory, but the other songs were forgettable.  Oh, well – there is always next time.

I Can’t Go On Living Baby Without You  https://www.youtube.com/watch?v=kKKHCEtCP4M

Kathy Young and the Innocents

While digging around about the Turtles I became interested in the crazy French Horn Player.

In this performance, he is playing the tambourine. It is one year after Happy Together and they are full on late 60’s, with mustaches to match.

And here he is with a ridiculous sweater with a “T” on it during another performance of Happy Together.

And here he is wearing what looks like some faded chaps on TV or a codpiece, I can’t quite tell. Either way, totally nutty.

I feel like I need to look into this guy more. He strikes me as the secret Dork King of the 60s.